eCode was arguably the earliest Social Network – before facebook, LinkedIn, MySpace, Friendster… “eCode.com exploits the essence of the web to allow users to network with each other“ — Aug 4, 1998. Press Release at...
Read More "eCode.com"

Rooh.It allowed anyone to highlight any part of any web page – without having to install any software to their computer/browser. As we are browsing the web, it’s really only portions of a page that...
Read More "Rooh.It"

The company is currently in stealth mode, and has raised private equity. As a funded venture, PymWym has not yet disclosed to the world at large what all the brouhaha is about 😉 Suffice it...
Read More "PymWym"

Following his passion for real estate – back in the 1990s, before the WWW – Rohit worked on MetroScan™ (think of it as zillow on a CD) 😉 As 1 of only 3 developers he got to work on some really cool technologies, and more interestingly their application. MetroScan (by Transamerica) was the pre-eminent and leading software used by realtors, appraisers, lenders etc. across the country with monthly/quarterly CDs shipping to customers. The MetroScan family had property details, plat maps, flood zones etc. etc. – essentially all data respective of a property including sales history and much more.

More than decade ago, Rohit started getting involved with residential real estate and has deep domain expertise and hands on knowledge: right from  due-diligence, short sales, REO, investing, acquiring, remodelling, upgrading, renting, leasing, maintaining, and what-have-you (evictions too!) Having written hundreds of offers, managing multi million dollar portfolios, and exploring a diverse array of opportunities; often times his friends have suggested he should just get a realtors’ license!😂

The primary areas of focus have been in Single Family Residence (SFR).

2 Billion $ valuation (Another one of the news articles) 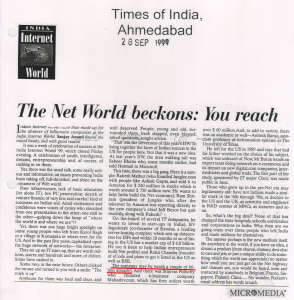 Can’t seem to locate it right now, will add it later…

Rohit has appeared on hundreds of TV shows, radio shows, conferences, industry events: moderated, presented, spoken at, and delivered the Keynote address. He has traveled – domestically, and internationally – to be a paid, and featured speaker.

Rohit hosted an over the air Talk Radio Show on entrepreneurship (with a reach to millions of listeners); and of course has been appeared as a guest too 😉 Sapne Salamat was a one of it’s kind show that invited (i) highly successful entrepreneurs with multi billion dollar exits, established Venture Capitalists with billions of dollars under management, (ii) serial entrepreneurs, angel investors, and (iii) aspiring entrepreneurs, lawyers, public relations service providers etc. – everything around the startup ecosystem that would help people Live Their Dreams.

Rohit has been the feature of numerous TV shows about entrepreneurship, Web technologies, social networking, and real estate. He has been a featured guest with Q&A style presentations; as well as on panels e.g. he was invited to be on a national 5-person panel with the Finance Minister of India, and the heads of Infosys, and Bharti Telecom – Narayan Murthy & Sunil Mittal – for expert perspectives on the national Budget, as it was announced. Many of these shows were live-cast to hundreds of millions of homes across a hundred+ countries.

Having presented at innumerable industry events, he has also played host/moderator, and been a ‘shark’ more than once judging entrepreneurial pitches. Rohit delivered the Keynote Speech at Internet World with ~3,000 attendees in the Keynote Hall, and ~80,000 attendees at the show itself.

As an entrepreneur/CEO, over the years Rohit has spoken at, and presented at innumerable meetings with  investors, venture capitalists, investment bankers, prospects, customers, employees, analysts, journalists, reporters, camera crews…

Founded and organized a salon style discussion group for in person discussions. The group had hundreds of members from all walks of life and used to meet at a local coffee shop once a week to talk about anything-under-the-sun. It was supposedly for “intelligent discussions” 😉 Rohit moderated all the in person discussions as well as any online follow-ups.

Beyond business programs on CNBC etc, he has also appeared in a film by National Geographic carrying a 400lb python, and been in an Egyptian feature film. 🙂 and dabbled with stand-up comedy too!